A Family Code that Responds to its Times 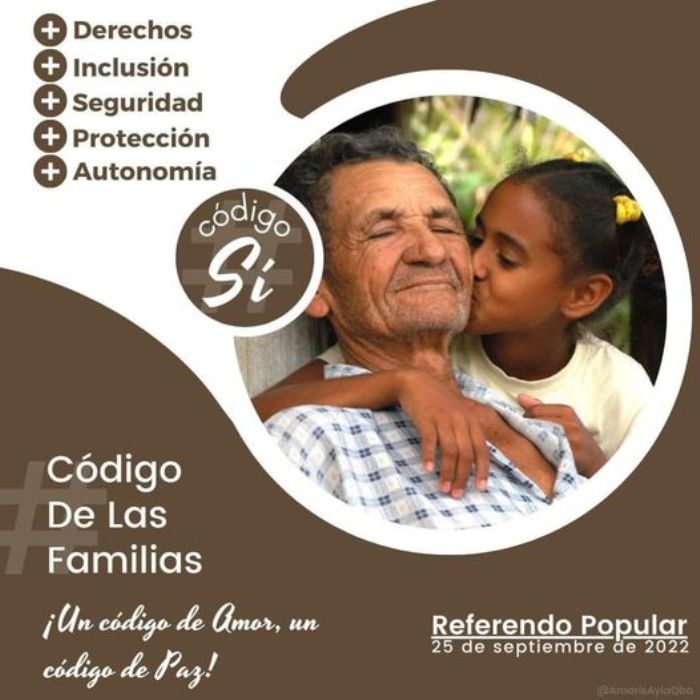 Nobody can replace the family as an educational and socializing institution. Neither schools nor important institutions can still replace it in the rich interpersonal exchange, the transmission and learning of values, norms of coexistence, and patterns of behavior.

The family is the essential place where we learn to appreciate nature and the place where we live. And there also begins the love for the homeland, the affection for everything that surrounds the individual, the esteem for the neighborhood, for one's own.

It is an inexhaustible source of unity, which goes beyond living together. In its bosom is formed self-respect and consideration for others; optimism; human solidarity; the possibility of being independent, responsible, and capable of making decisions.

Cubans, aware of this role, continue to live in families and value this group very highly, in which life, values, and affection are first learned, without sparing time or space.

While it is true that Cuba is moving along a more democratic path, in which shared responsibility, mutual help, respect, and expressions of affection are the essential bases on which it rests, these processes do not occur equally in all types of households.

The Family Code, submitted to a direct and secret vote in the referendum on Sunday, September 25, speaks of how far Cuban society has advanced in terms of the rights and protection of its citizens, from birth to old age.

Given the challenges in the Cuban social scenario and accordance with the diversity of families and problems related to them, the Constitution of the Republic, put into effect in 2019, provided for the approval of a new Code, also taking into account the reconfiguration of families and their diversity in Cuba.

The first Family Code approved in the country (Law 1289) in February 1975, was put into effect on March 8 of that same year, in honor of International Women's Day. A copy of the document was specially prepared to be given to the representative of the women's organization and the revolutionary and social values of Cuban women, Vilma Espín Guillois, because in its genesis it was responding to many of the issues discussed at the Second Congress of the Federation of Cuban Women, in November 1974.

That Code, the first of its kind in the history of Cuba, enshrined in its norms the complete legal equality of women and children in the family. It is an important step in the struggle of the Revolution for the true equality of all men and women, blacks and whites, in society and life.

The essence of the second Code, which extends its scope to families, is much more complete and comprehensive, in tune with the times in which we live. For more than 20 years, the need to modify the current Code has been considered, first of all, because the legal practice has shown that it does not contain the legal institutions demanded in the current Cuban reality.

Several circumstances have required the modification or approval of a new Code. For example, there was no regulation protecting the rights of grandparents and other relatives, there was no variety in the economic regime of marriage, there were problems in the determination of guardianship and care, and the communication of parents concerning their children; there were limitations in the protection of the elderly and disabled, while the issue of domestic violence was not regulated. Reality showed us that all these situations required legal support.

In addition to continuing to respond to the social justice project of the Revolution, the Family Code resembles and responds to its time. Its approval by Cubans with the right to vote will be an essential step, now and in the future, towards human dignity and effective equality for all.