The Entire Homeland is in Women

The Federation of Cuban Women (FMC) was born at the precise moment when the ship of the new work was setting sail for the future. It was Tuesday, 23 August 1960, and few imagined the great strategic scope of this event for the Revolution and the very destiny of the country. Fidel Castro, with his far-sighted vision, defined it accurately: "A historic and promising day."

On that date, 62 years ago now, the revolutionary joy and enthusiasm was strongly felt in the theater of the Central de Trabajadores de Cuba, where a large number of women, from early in the morning, attended the event that marked the essential milestone in the struggles for the emancipation and full equality of Cuban women and where Vilma Espín Guillois, the hero of the Sierra and the Llano, was elected president of the organization.

The leader of the Revolution, Fidel Castro, at the closing ceremony, visibly moved, exhorted: "Let there not be a single place in Cuba where the Federation of Cuban Women is not constituted, let there not be a single revolutionary woman who is not grouped in the Federation of Cuban Women, and you will see how the Revolution will be able to count on another force, on a new organized force, on a tremendous social and revolutionary force!

The FMC brought together all the revolutionary women's groups that had existed in the country until then. Its actions made it possible for women to constantly improve themselves, to work in different professions and trades, as well as guaranteeing the increasing integration of Cuban women into the social, political and economic life of the country.

Countless concrete tasks, which in the early years were very simple and then became more complex and far-reaching, have had Cuban women as protagonists, from the training of former domestic workers (inherited from the pre-1959 period), the fight against illiteracy, against prostitution, for the education of their children, the creation of militias, the search for opportunities for peasant women, but above all, the defence of the homeland, which has been a permanent concern of the FMC.

And today, in the new trenches, women take on the daily challenges with the dynamics demanded by the constraints of a sovereign homeland, but perennially threatened and, therefore, in need of sacrifice and dedication. 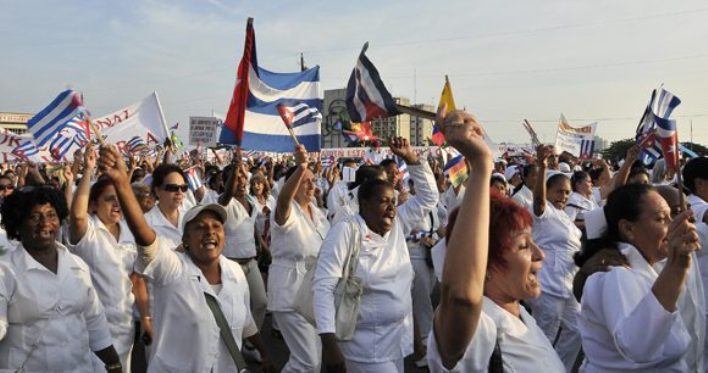 In recent days, the images of the award ceremony and the well-deserved congratulations have multiplied. Many women have been recognized as outstanding in their work. And there has been no lack of homage from political and mass organizations, and the main authorities of each province, in recognition of the organization's performance in the territories, together with the presentation of the 23rd of August Distinction.

On this anniversary, the Federation of Cuban Women ratifies its will to create and multiply in each of the communities to achieve the strengthening of all its structures, especially because this day is dedicated to the Commander in Chief, to Vilma, to the Cuban youth and, in particular, to the Federation of University Students which will celebrate its centenary next December.

She is remembered with deep affection, because the eternal president Vilma is present in all the battles of the women's organization, for example, in the National Program for the Advancement of Women, an expression of the will of the state to put on the table the issues of gender equality, the elimination of stereotypes and the empowerment of Cuban women.

She will also be, with her enthusiasm and energy, accompanying her federates in the popular referendum on 25 September to approve the Family Code, after a broad process of discussion in the communities and delegations of the FMC. A Yes vote at the ballot box will endorse the revolutionary gains that women enjoy today in a free and sovereign Cuba.