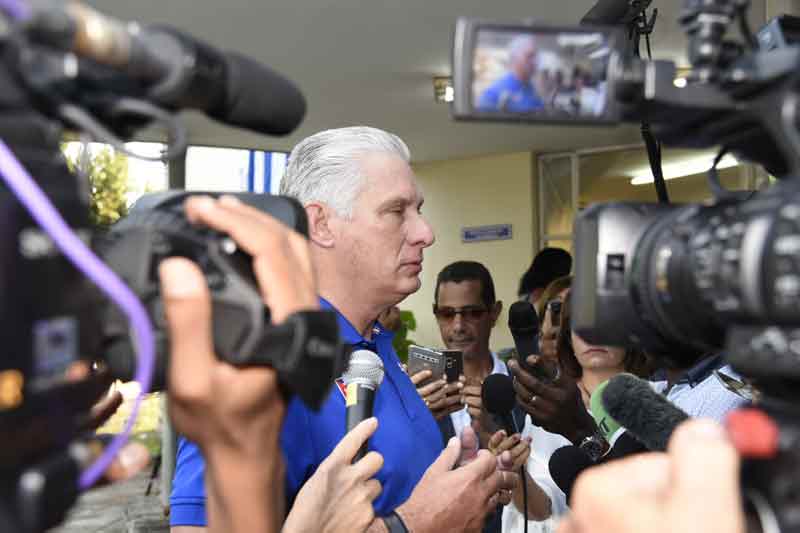 President Miguel Diaz-Canel said on Sunday that Cuba grew up in the process generated by the new Family Code, and expressed confidence in its approval in today's referendum.

In statements to reporters after exercising his right to vote, the president pointed out that although there should not be a unanimous vote, he does expect majority support from citizens. He acknowledged that a part of Cuban society still fails to understand some elements contained in the regulations because, in 62 years of the Revolution, patriarchal criteria have persisted in some people and families.

The head of State added that the process of constructing the Code respected everyone’s right to an opinion, but he regretted that for reasons of belief a part of the citizenry still does not understand that the law respects the type of family that they defend and also protects the rights of other forms of love.

Diaz-Canel noted that a strategy of demonization of the Cuban Revolution, of discredit, is also underway, which generates a lot of hatred towards everything related to it, mainly on social networks.

In this regard, he added that those who are part of this platform use very aggressive language against the Code, but none of it has to do with convictions or opinions, because if it said the opposite, they would still criticize it because it is a legal norm within the Revolution.

Diaz-Canel highlighted the benefits of the legal document, which gives rights and guarantees to the entire society regardless of the type of family organization.

He stressed that the Family Code was a necessity since the nation has become more heterogeneous and there were debts from the legal point of view, evident in the life stories told these days, recorded in research works, and in situations discussed in court.

The new law resolves these issues, said the president, who extolled the participation of the people and experts in the process of building the law, and urged them to read it and interpret it with their hearts, putting themselves in the place of others, of those who have experienced complex situations.

I think that Cuba has grown up, the president emphasized, adding that this is the most important thing, the growth as a society.