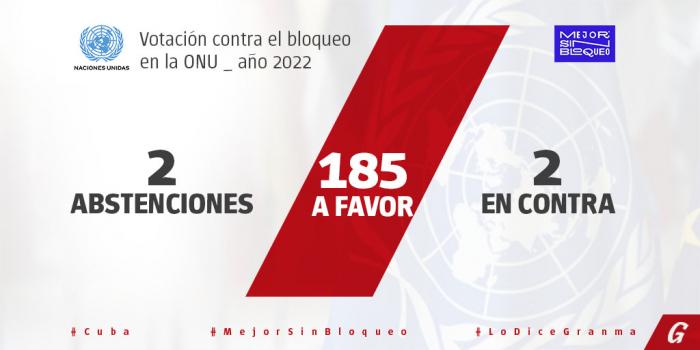 The vast majority of countries voted in the UN General Assembly against the U.S. blockade of Cuba, ratifying the isolation and worldwide rejection of Washington's hostile policy.

The resolution was approved by 185 votes in favor, while maintaining the opposition of the United States and its unconditional ally Israel, while Brazil and Ukraine abstained.

This text will be added to the 29 resolutions adopted every year since 1992, when this type of voting began, interrupted only in 2020 due to the Covid-19 pandemic.

The vote was preceded by speeches by representatives of countries and regional blocs, who for two days insisted on the importance of eliminating these coercive unilateral measures, considered the main obstacle to the development of the Caribbean country.

On the last day of debate, prior to the vote, the Cuban Foreign Minister, Bruno Rodriguez, affirmed that more than 80% of the population of his country was born under the blockade.

He recalled that three decades have passed since the UN General Assembly voted for the first time on this resolution, which has received universal support.

The head of the island's diplomacy, who asked to let Cuba live in peace, without blockade, warned that since 2019, the US government escalated the siege against the island to a more cruel and inhuman dimension.

He stressed that during the first 14 months of Joseph Biden's administration, the damages amounted to 6 billion 364 million dollars, which is equivalent to an affectation of more than 15 million dollars a day.

In this sense, he added that the blockade "creates the conditions that feed irregular, disorderly and unsafe migration, the painful separation of families, and contributes to the crime of human trafficking".

He also referred to the extraterritorial impact of this policy of suffocation that "damages the sovereignty of the countries of the United Nations, sanctions their businessmen and prevents access to their ports for third party ships that dock in Cuba".

At the same time, he denounced that in the midst of the COVID-19 pandemic, the U.S. government excluded the Cuban people from the temporary humanitarian relief applied to other nations.

Thursday's vote at the UN was similar to that of previous years.

In November 2019 it was 187 in favor and 3 votes against from: United States, Israel and Brazil, while Colombia and Ukraine abstained. These General Assembly resolutions reflect world opinion, but are neither binding nor enforceable.

The U.S. economic, commercial and financial blockade of the Caribbean nation dates back to 1960 when the then Deputy Secretary of State, Lester D. Mallory, wrote a secret memorandum advising on how to try to strangle Cuba.

The point, he said, was to deprive the island "of money and supplies, to reduce its financial resources and real wages, to cause hunger, despair and the overthrow of the government.