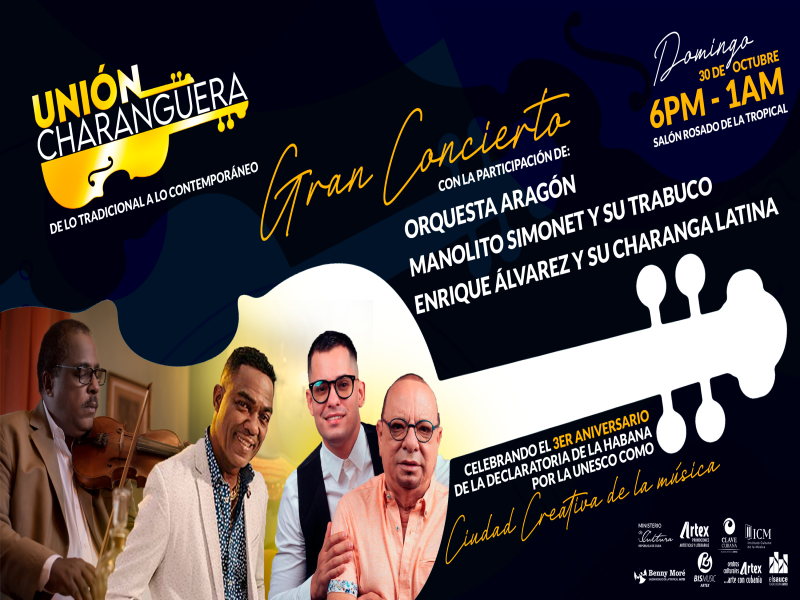 The Encuentro Unión Charanguera is celebrating the charanga format, its artists, and its legacy. The Cuban orchestras Aragón, Manolito Simonet y su Trabuco, and Enrique Álvarez y su Charanga Latina will be the protagonists of this event.

With a great concert on Sunday, October 30, in the Salón Rosado de la Tropical, starting at 6:00 p.m., these three remarkable groups will perform to pay homage to three important pillars of Cuban music, the percussionist Enrique Lazaga, the remembered orchestra Ritmo Oriental, as well as to maestro Rafael Lay Apesteguia, for the legacy he left, on the 95th anniversary of his birth.

"Unión Charanguera was conceived to bring together the orchestras that support this traditional format, taking into account their origins, as well as those that life led them to evolve musically, by desire or by the necessity of time", said Camagüey-born violinist Enrique Álvarez, creator of the event together with his son Lázaro, at a press conference.

"We have dedicated a lot of time and many hours to making this dream come true, which this time will take the form of a meeting, but we aspire to make it a festival in all its dimensions; a festival that unites, that contributes, that is not exclusive, in which the essence is the music and the musician, the dancing public, the Cuban people, Cuba and our identity," added the maestro.

The Encuentro Unión Charanguera will highlight the importance of the charanga format in Cuban music history and its evolution. The charangas have performed iconic genres of traditional music and cultural events that have been recorded in Cuban music.

This first edition, sponsored and promoted by ARTex, will be accompanied by the 1st  Unión Charanguera Symposium, on Friday, October 28, in the Juan Formell Hall of the El Sauce Cultural Center, from 10:00 a.m. to 5:00 p.m., with free admission to the public.

The theoretical event, under the educational conception and general coordination of musicologist Neris González Bello, will be the ideal platform to discuss the concept of the charanga and its various manifestations in the Cuban cultural context and its outstanding figures and projection in the music industry.

"Through panels, the thematic lines that deal with the scope and projection of the charanga format will be contemplated, as well as the notions that currently exist of the term, which transcend the musical sphere; biographical research that offers a look at the work of emblematic figures and groups in Cuban music history that will be paid tribute to in this edition", said the researcher, who is also a research associate of the Cuban Academy of Sciences, in her speech.

She added: "This will become the ideal occasion for official presentations of record productions of the Bis Music recording company related to this format: La Ritmo te está llamando, A lo Jorrín and Manolito Simonet presenta tributo a La Maravilla.

Encuentro Unión Charanguera also highlights among its aims the celebrations for the third anniversary of Havana's declaration as a Creative City of Music by UNESCO.